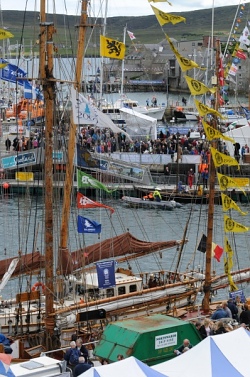 Over 2000 captains, crew and Sail Trainees from the 54 Tall Ships berthed in Shetland will parade in spectacular style from the Esplanade to Holmsgarth, marking the start of the magnificent crew parade as The Tall Ships Races 2011 – Lerwick, presented by Szczecin and organised by Sail Training International, officially gets underway.

Mustering at 3.15pm in full uniform and fancy dress, the parade will start at 4pm with a blast of gunfire from Fort Charlotte, organised by the Territorial Army.  The parade will then be led in typical Shetland style by Jarl John Hunter and his Jarl squad accompanied by Lerwick Legion Pipe Band.  Heading north with the start of parade at Albert Buildings, the international crews from the ships will then move along towards Holmsgarth in alphabetical order, A-Z, each ship represented by a signpost.

The parade will also feature music from the Lerwick Pipe Band, a samba band, a brass band and Aestaewest.  The bands will be interweaved with each of the crews creating a magnificent array of music and colour.

Fiona Dally, project manager of The Tall Ships Races 2011 – Lerwick said: “We’re hoping many members of the public as well as visitors will join us for the formal start to the festivities with our fantastic crew parade.  For those who haven’t witnessed it, it really is something not to be missed and sure to get our event off to a wonderful start.”

Once they reach Holmsgarth at 5pm, activity will move to the main stage where dancers, musicians and singers will provide the official welcome to race participants and visitors in a specially commissioned Welcoming Ceremony.

Directly following the Welcoming Ceremony, a prize-giving ceremony will take place on behalf of The Tall Ships Races 2011 – Lerwick and Sail Training International,  where prizes will be given for a range of categories including “Best arrival in Port”, “Best crew in the Crew Parade” and “Youngest Trainee”.

Event information points will be located at Albert Wharf and Holmsgarth throughout the duration of the event and a free shuttle bus will operate between The Esplanade and Holmsgarth.