You are here: Home » Cruise In Company » Scalloway

60°08’.00N 001°16’.34W
Scalloway was once the ancient capital of Shetland, although no longer the seat of government, it boasts a healthy ﬁshing and seafood industry and is the location of the North Atlantic Fisheries College Marine Centre

Subject to change and weather

With a population of 1000 the village has retained the idyllic charm of a small ﬁshing port and picturesque harbour, set below the ruins of Scalloway Castle. The castle was built from 1595 - 1600 by Earl Patrick Stewart (nephew of Mary Queen of Scots) who was executed for treason in 1615.

There is a strong link to the past and the Shetland Bus Memorial commemorates the Norwegian ﬁshing vessels and crews who bravely ferried people and weapons between Scalloway and occupied Norway during World War II.

The Scalloway Summer Street Party will be happening during the week from 16-21 July, featuring a wide range of traditional and modern music, dance, drumming, and community events. During this time the Fraser Park Open Day will bring the whole community out to welcome the visiting ships and provide a feast of fun and games for young and old.

Scalloway is a gateway to explore a huge diversity of Shetland landscapes, beaches, history and wildlife. 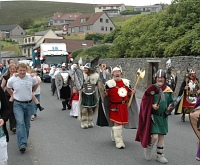 Scalloway, once the ancient capital of Shetland, and now a small, picturesque fishing port has an energetic community spirit at its core. As a guest harbour of the Tall Ships Races, they have organised a wonderful line-up of events, which will showcase the charms of the village, its healthy seafood industry – and also demonstrate that they very much know how to host a party.

For three days from 15 – 19 July, you’ll be spoilt for choice. The arrival of the Tall Ships Races coincides with their annual Summer Street Party, so visitors will be treated to traditional and modern music, dance, and other community events.

The Summer Street Party will bring the centre of the village alive and will be a focus for all the musical entertainment. The Waterfront Stage will guarantee to keep you on your toes until midnight every evening and the Gala Survivors Concert at the Boating Club promises to be a cracker of an event, with an eclectic range of music lined up, including Caithness band the Chicken Pickers as well as traditional folk from locals May & Mackie. There’s also the Family Night Concert and Popeye’s Charity Fundraiser featuring music from local and visiting artists.

The Summer Fire Festival on Monday will mark the spectacular climax of what’s sure to be an unforgettable weekend. Jarl squads from the past seven years will march in the parade, led by the Edinburgh Postal Pipe Band, along with all the regular squads. Ships’ crews and visitors are also invited to take part in the procession and join the squads as they carry flaming torches through the streets behind the galley to the burning site.