Lerwick Port Authority is on board as the first major Host Port Sponsor for Shetland’s participation in The Tall Ships Races 2011. 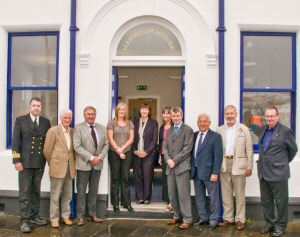 Keys for rent-free office accommodation at Harbour House are being handed over today (Tuesday 15 September, 2009) by Port Authority Chairman, Brian Anderson, to Fiona Dally, Project Manager for Shetland Tall Ships 2011 Ltd which will occupy the premises over the next two years while organising the visit and associated programme.

The sponsorship package, which also includes berthing, pilotage and tugs, is worth approximately £100,000. Quaysides will also be made available adjacent to the fleet for related activities during the visit, from 21-24 July.

Port Authority Chief Executive, Sandra Laurenson, leads Shetland Tall Ships’ Harbour sub committee and is a Director on Shetland Tall Ships 2011 Ltd. Harbour Master, Captain Calum Grains, is developing berthing plans which will be completed when the final number and size of vessels is known in May 2011.

Brian Anderson said: “Being a Host Port again for this prestigious international event is an important opportunity for the Authority’s involvement with the community, and to help to promote Shetland and further develop the tourism industry for which the harbour is a key gateway for ferry and cruise passengers, as well as yacht crews.

“The tremendous success of the previous Tall Ships Races’ visit in 1999 and the organisation being put in place for the return gives us every confidence that the 2011 event will be even more spectacular and memorable.”

Shetland Tall Ships 2011 Ltd is the first company to occupy the listed, two-storey Harbour House offices on the Esplanade since they were recently completely refurbished by the Port Authority at a cost of £490,000. The location is next to the harbour and the town centre.

Fiona Dally, Project Manager of Shetland Tall Ships 2011 Ltd, said: “Having access at this early stage to modern offices at a prime location and no cost, along with the other components in the Port Authority’s sponsorship package, is a significant step forward in organising Shetland’s role in The Tall Ships Races.  We look forward to hosting the Races and showcasing our local culture, landscape and community spirit to a huge number of international visitors.

“We are very grateful to the Authority for its generosity and co-operation and look forward to others following its example by becoming Host Port Sponsors of an event expected to attract considerably more ships than 10 years ago.”

This week, Louise Cluness has been recruited as the Operations Assistant to join the Project Manager in the planning of this international event.  Mrs Cluness brings considerable financial experience from her recent role with AB Associates and former project management with the NatWest Island Games held in 2005.