Countdown begins as Lerwick gears up for maritime spectacular

The 30 day countdown has begun for the largest international festival in Shetland in over a decade! 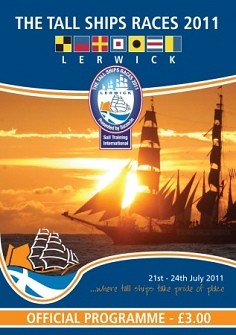 Organisers of The Tall Ships Races 2011 - Lerwick have confirmed that a total of 57 ships from 12 countries will sail into Shetland during the event which takes place from 21st – 24th July 2011.

42 young people from all over Shetland will also taste life on the ocean wave this summer as they take part in the sail training experience with placements on seven Tall Ships during The Tall Ships Races, presented by Szczecin and organised by Sail Training International – a charity established to harness sail training to develop and educate young people, regardless of nationality, culture, religion, gender or social background.

The lucky candidates will experience life as crew members, undertaking tasks such as watch-keeping, setting sails and other domestic duties with the other trainees onboard the vessels that will visit Lerwick.

Fiona Dally, project manager of The Tall Ships Races 2011 – Lerwick, said: "Over 2000 crew members and several thousand visitors can expect a marvellous welcome when they arrive on Shetland come July.

"Our partners, Host Port sponsors, volunteers and the Shetland community have come together in great force to be able to bring this fantastic event to this point, and it won't be long before the anchors drop and we can settle down to a weekend of festivities."

Highlights for the event include a spectacular fireworks display, an international crew parade and Welcoming Ceremony, headline concerts from The Levellers and Bjorn Again as well as over 100 local music performances, family fun zones and the finale, Parade of Sail.

Activities kick-off in earnest with the fantastic crew parade at 4pm on Thursday 21st July where over 2,000 crew from 12 countries will parade along the waterfront in Lerwick in a fantastic spectacle of colour and music starting at the Esplanade. At 5pm, focus moves to the main arena at Holmsgarth where dancers, musicians and singers will provide the official welcome to race participants and visitors in a specially commissioned Welcoming Ceremony.

On Friday 22nd July, a packed programme of street entertainment, traditional and contemporary music, local food and drink, and arts and crafts continues as well as a full family entertainment programme. The first of the sell out headline concerts, The Levellers and support hit the stage at Holmsgarth from 6.30pm onwards.

On Saturday 23rd July, the cultural programme continues with plenty of live music and family fun throughout the day, rounded off with the second of the headline concerts, Bjorn Again and support on stage from 6.30pm, with a fantastic fireworks display lighting up the night sky at 11.50pm.

Sunday 24th July is the last day of The Tall Ships Races visit to Shetland and the magnificent Parade of Sail promises to be a spectacular sight, with each of the ships raising their sails in a sea of splendour in preparation for Race Two. From 5pm, Race 2 starts with the ships leaving Shetland hoping for a strong wind all the way to Stavanger in Norway.

Event information points will be located at Albert Wharf and Holmsgarth throughout the duration of the event and a free shuttle bus will operate between The Esplanade and Holmsgarth.